Provided under the Naval Defence Act of 1889, these ships were reduced editions of the Blake class with the same armour and armament arrangement. Displacement was reduced by 1800t by adopting a smaller machinery plant, for a designed speed of 20kts, and a reduced coal stowage giving an endurance of 10,000nm at 10kts. However, the machinery proved very reliable and most exceeded the designed speed on trial. As the Blake class had not achieved their designed speed and endurance, the Edgars proved equal to their predecessors in everything except the thickness of their armoured deck while representing a substantial saving in size and cost. In service they proved to be very good sea boats and exceptional steamers. The Royal Arthur averaged 18kts for 48 hours after serving 18 months as flagship of the Pacific station without entering a dockyard, and her sisters achieved similar performances at various times. Besides the main boiler plant they carried a single-ended cyl boiler for auxiliary use.

The Gibraltar, Crescent, Royal Arthur and St George were sheathed in wood and copper for tropical service which added 350t to their displacements, reduced speed by ½ kt and lowered their endurance. The Crescent and Royal Arthur were fitted with a forecastle, to increase freeboard forward and improve seaworthiness, and carried two 6in QF guns forward in place of the single 9.2in. Their early years were spent mainly on foreign stations and ships of the class served in the Mediterranean and Pacific and on the Cape, China and Australia stations, whilst the Crescent was flagship of the NAWI station 1895-97 and 1899-1902. Although obsolete by 1914 they saw extensive service in the First World War.

Footnote to the 'Crescent' cruise:

"So the CRESCENT is to be paid off by the Duke of York after a commission of only about ten weeks! It seems to me a most scandalous waste of the public money to go to the expense of commissioning a vessel of this class for such a ridiculously short period. It is this sort of fatuity which was common enough in the reign of Charles II but during the present century it has only been in Russia and Turkey that such absurd folly has been heard of.

If it were desired to let the Duke of York enjoy a summer cruise (for the CRESCENT commission has been a mere pleasure excursion but an uncommonly costly one to the country) surely H.R.H. might have gone to sea in one of the Royal Yachts. The VICTORIA & ALBERT lies idle in Cowes Roads and the OSBORNE has been in use for only a fortnight. The unprecedently speedy conclusion of the Duke's commission forms a queer commentary upon the maudlin gush of most of the papers about his irrepressible enthusiasm for the profession." 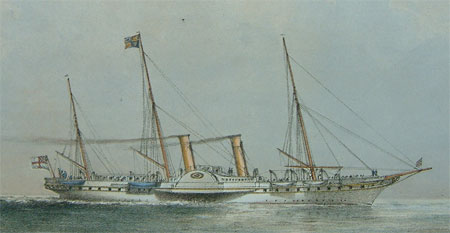